My favorite part of the design notes is sharing the behind the scenes stories of how we make things. Many of you have been with us for many years-- you have seen what I am about to talk about first hand. But if you are just joining us, this is an interesting point in the story to jump in! Behold, this year's brand new 2014 Artix Entertainment Calendar Poster! 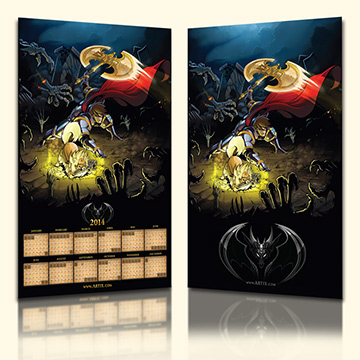 We created our first calendar 4 years ago. We worked really hard on it, using mostly Oishii's art (Oishii was the first artist to join the team.) It featured all of our female characters. The reaction was overwhelmingly "Uh... this is girly!" We even recieved a phone call from a parent asking if we had any that were more... you know... for boys.

So, LOL, the next year Diozz joined the team. He created a more villain oriented calendar and it was recieved really well. We were able to make it thanks to Toys"R"Us to helped cover the costs of production. It sold out completely HeroMart, but, unlike our card game, it did not do well at all in Toys"R"Us. We actually bought calendars back from Toys"R"Us to put more on HeroMart that year. The following year, we created our first Calendar Poster. It was the coolest thing we had ever created. We made it double sided. The front side had the calendar on it. The idea was, when the year was over people could flip it over and it would be an awesome stand-alone-poster. Players loved it!

This year, Diozz drew the scene above as a personal gift to me. It was so... dark, dangerous, with a feeling of action and no matter how many undead surrounded Artix he was going to fight and fight and fight and win! I asked Diozz if we could use his art for this year's 2014 calendar and he smiled and said he was honored.

Dage spent several days digitally painting it. It was tricky because the original picture was landscape. We tried it, but a sideways poster just felt weird. So Diozz and Dage spend a lot of time repainting and re-editing it to fit perfectly on a tall poster. You probably want to hear about the class and items that come with it, but you can see all of that on the HeroMart site.

I really wanted to share the story and love that went into creating this. The poster/calendar has become a new yearly tradition and this one...  perfectly matches the new dark, epic, and heroic feel that we want to put into our games. If you get one -- I would love to see a picture of it on your wall!

NOTE: To give our support and help those affected by Typhoon Haiyan/Yolanda, we will be donating 20% of all calendar profit to the Red Cross in the Philippines through the end of November. AdventureQuest Worlds has 1,329,791 players who live in the Philippines.  So if you are going to get a calendar, order it now—it feels better knowing your game stuff is chipping in for a good cause!