The Gateway To Lore

This week along with the rest of the release, we will probably* be launching a new login screen for Dragonfable! We want new players to get a good taste of what they're in for as they dive into the game, and so we've spiffed it up. In addition to the Seppy bg you see when you login now, there will also be 4 new themed screens that may show up instead when you login. The character select screen also has a new look, and the character creation area will be updated as well. We've also tweaked the aesthetics of the GUI** and you'll notice some slight changes through the in-game menus. And to top it all off, we also gave DF a special theme song that will play as you login. But don't worry, you'll be able to mute it if you want. :P 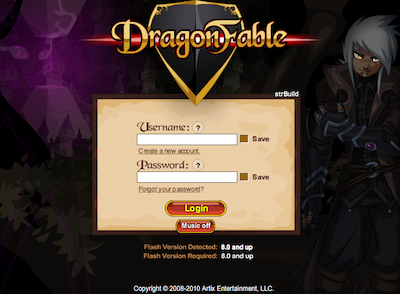 I also want to congratulate you guys on rocking the war last week. Great job! If I was Wargoth, I wouldn't be so quick to assume I've got this world in the bag. Unless I was as powerful as I think I am, in which case I am pretty much invicible. Actually that'd be pretty awesome. Rather than setting the world ablaze though, I'd probably be more inclined to just build a big barbecue and invite everybody over for lunch, but ya know whatever floats your boat.