is giving you what you want.

SO many things you've been waiting for!

It's FRIDAY! And man oh man, are we in a TGIF mood here in the Secret Underground Lab.

We spent part of the morning teaching Beleen to sing ("London Bridges Falling Down" fell flat until we had a voice-box breakthrough) and broke for pizza. Friday is usually pizza day.

A secret project was displayed in the war room, Ai No Miko kept sneezing and Mido played rock and trance music all day... It was a pretty good day, all told.

And, of course, we were working all da- Oh. Did you want me to talk about the release? Was I keeping you waiting? Sooooorry! Just having a bit of fun with you!  Here are the release details!

First up is the release we had to delay from last week. That's right, it's En and Tropy time.* 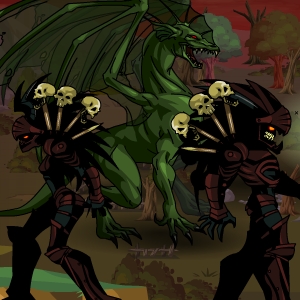 Play AS En and take Tropy along as a DOOM-dealing GUEST OF DESTRUCTION!!1! But oh, you won't be fighting REGULAR monsters. Oh no no no. Opponents like that wouldn't be worthy of Sepulchure's creations. No, YOU will be attempting to sway Gorgok to Sepulchure's side.

Through the VERY persuasive power of battle, of course! I have a hunch that Gorgok might not want to play nice, so you'll have to get your golem gears in motion and see to it that Sepulchure's next move is ready to set into play!

*I sing that to myself to the tune of "Peanutbutter jelly time" and you can, too. Sing out, sing loud. Let yourself go!

And as a SURPRISE release... we have: 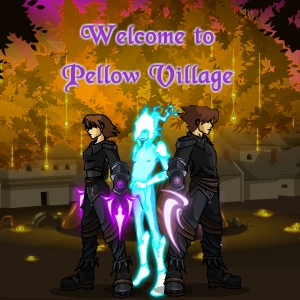 If you've completed the RavenLoss War, when you enter RavenLoss, you'll see a button which will take you to Pellow Village! Have fun exploring this abandoned (and VERY purple) city! You'll find boarded up shops, weird (but pretty) glowing fungus-lights, and the ??? pet in a clearing next to an ancient golden oak.

Talk to Tomix and watch the "Meet Aegis" cutscene in order to find and bond to your SoulAlly. Once you've watched that, head back out to the main screen of RavenLoss and you'll see a button which will let you invite Aegis as a guest! But he'll ONLY agree to come along with you if you have the SoulWeaver Armor equipped. Which brings me to my final point...

Talk to Tomix to begin training as a SoulWeaver! You'll need to give him 3 Shards of the Spirit Loom to unlock the armor, then another Shard for each additional class skill.

You can get Shards of the SpiritLoom by doing any of Tomix's random quests.

We know you've been waiting a LONG time for these releases, and we hope you enjoy playing through them as much as we've enjoyed creating them for you! If you like what you're seeing and playing, then why not head on over to this page and become a DragonLord!

DragonLord members have upgraded one or more times in order to help support the game. We couldn't make it as awesome as we do without your help! (Mostly because we'd be working other jobs. Like straight-flipping copies at Kinko's. Also flipping burgers. But not at Kinko's.)