What's Hugs Got to Do, Got to Do with it?

This is the pinkest, heart-iest*, lovingest day of the year, and we want to celebrate it with you! And what better way to do that than with a brand new weapon set? Yay!

Coming later today will be the Poison and Roses weapon set from True Mortal. Be careful how you hold these weapons, because the love these weapons inspire is oh so beautiful, but very, very deadly!

Last week we released the previous years of Hero's Heart Day events, and THIS year's event will go live this Friday! 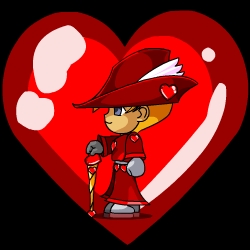 We know many of you are expecting 1) a war and 2) Lust from the Ravenloss Saga to be the main villain, but she's run off to who-knows-where. She doesn't want Tomix to find and destroy her! (Would you, if you were a corrupt spirit? I didn't think so.) And since we've JUST come off a huge war (a war we're not even DONE with!), starting another one would be a less-than-great idea. You warmongers need to take a breather! Conserve your strength!

That doesn't mean there won't be a villain this year. It's LORE and a holiday. Of COURSE there's going to be a villain! It'll be someone you recognize, but who hasn't shown their face in a couple of years. Will there be betrayal? Maybe! Tears? Probably! Pink? Most definitely! Happy speculating!

* Yarrrrr, it be Valentine's Day, maties! (Is what pirates say today.)

We have some good news and some sub-great news! Which do you want first?

We LOVE Hero's Heart Day here on the DF team. And we adore putting out awesome content for the holiday. The holiday that is only one week a year. So if we're going to do something for that holiday, we need to do it NOW. THIS week! So unfortunately we have to delay Pellow Village and the Soul-Ally content until next week.

We are definitely looking forward to releasing all of that, and we know you guys are, too! While we finish working on HHD and the Soul-Ally/Pellow Village content, why don't you guys work on getting the Greed meter up to 100%

Why does that matter? Becacuse of the good news! Cysero has created replicas of the Judgement Wheel from sketches Tomix made! As they are only replicas, they will not grant wishes. But they WILL serve you well in battle! There will be the Judgement Replica: Guilt and the Judgement Replica: Innocence. And since it's Cysero who made them, they'll be selling for Dragon Coins both in his shop and in the War Rewards chest in RavenLoss. These are some of the prettiest weapons we have in-game!

And the Hero's Heart Day event isn't all we're releasing this week! Geopetal is also planning on the next installation of the Earth Orb Saga!

Time to get back to work!