If you haven't heard what the Artix Entertainment game crew is doing this week, let me fill you in.  We've got 9 teams ranging from 1-5 people per team and we have five, count'em FIVE, days in which to make NINE minigames!  (That's roughly double the content AE puts out in a normal week!)

It should be an awesomely fun challenge!  Most of the DragonFable staff are on one team: Rolith, geo, and I are all on Team Robot Unicorn along with J6 from AdventureQuest Worlds.  So... what are we making? 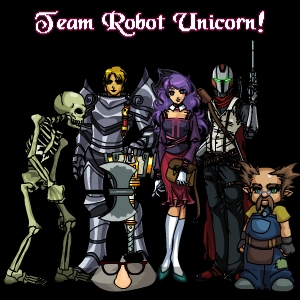 A castle defense/DOTA style game set during the time of the Popsprocket War! It'll be gnomes (and robots) versus undead.  Fun!!! Rolith is taking care of coding, J6 is on art, geo's helping with brainstorming and storyline, and I'm responsible for the storyline and PR.

Speaking of the storyline... Anyone up for making this all the Mysterious Gnome's fault?

MORE COMING UP THIS WEEK!

Also this week, we've still got more war for you to finish! The ChaosWeaver Nation is being decimated, but do you have enough numbers to take them ALL down?  Just how many of them ARE there?  A "Nation" sounds like a LOT!  But you can do it, we believe in you!

And don't forget to take down some of Greed's minions! There is a new set of monsters on the Greed side: the embodiments! Now, you might think those should be on the ChaosWeaver side, and that would make sense.  Except that when Greed entered Pellow Village early, he got a head start on corrupting the creatures in the Village.  And MANY of those creatures were Embodiments! The Greed-side monsters will randomly switch between embodiments and the regular minions starting today. This should keep the fighting fresh!

And you've got the 50% cutscene to look forward to, as well! I won't spoil what it's about, mostly becacuse the cutscene itself is spoiler-tastic.  So if you want to know the answers to many of the questions that have been raised throughout this Saga... get that war meter to 50%! (It doesn't matter which one!)

We are racing to finish all the art and animation for the war.  Will we beat YOU trying to beat US? I don't know! But we're certainly going to TRY! (As Artix would say: "Don't give up now, we're just about to win!")

But the Gametastic Challenge and the new Ravenloss war content are not all that we're releasing this week! On Friday, we'll also open up Big Daddy's Pad so that you can replay all the old Hero's Heart Day content.  On Monday, February 14th, we'll release the HHD 2011 weapons set, and then on Friday, February 18th, we'll release THIS year's Hero's Heart Day content. Along with a shop full of VERY fun pets!