Reimagined: The Book 1 Timeline is Here!

This week in DragonFable, we've added a timeline for Book 1! After spending days combing through quest texts and guides and forgotten documents and losing sleep writing and linking descriptions (Over 70 sections!), we're proud to release the Book 1 Timeline! While things may still be up for adjustment should we have messed anything up, this is the definitive timeline for DragonFable's often confusing Book 1. 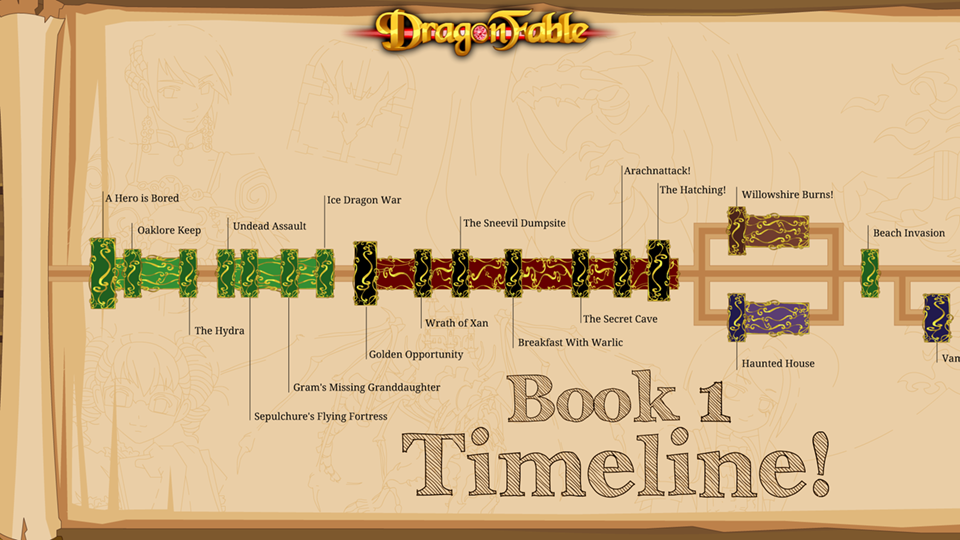 Also, while the timeline does not include every quest or quest line in book 1 (by far!) we did our best to include anything that was highly relevant to the plot of Book 1 and future plots in Books 2 and 3.

Being a Reimagined release, we've also added some new functionality to the timelines (Book 1 AND 3!)

There's been a bug fix as well that may impact the use of Book 1's timeline. Previously, the Wind Orb, Energy Orb, and Water Orb were considered "obtained" one quest too early. As a result, some of you may see some oddities when using the timeline or the Book of Lore until you actually complete those quests.

Also, Book 1's orbs can no longer be used to teleport to locations until you complete their respective questlines. This is to prevent storyline confusion, since, believe it or not, there is a rather solid order in which the orbs are done. These locations can all now be accessed from the new timeline.

That said, if you are determined, you can still access the storylines out of order from the travel map or just exploring. The timeline is a guide, and doesn't have to be followed if you do not want to.

Now is the perfect time to replay those ancient, punny, crazy, epic, (and possibly buggy) quests of Book 1: The Orb Saga!

So it turns out untangling the web that is Book 1, coming up with and typing out descriptions for all 70+ story points, connecting things behind the scenes, setting up the timeline tracker, etc, took a lot of work. Unfortunately, since there is only one of me, that means no progress was made on Chaosweaver this week.

But do not fret! It's coming, and I'd rather do it well than rush it as a side project.

A button to purchase bag space has been added to the Boosts tab in the Book of Lore.

A button to open the purchase Dragon Coins page has been added to the Boosts tab in the Book of Lore.

Demnra's Deception will be sticking around for a final FINAL week. Be sure to get it before it leaves! It really will!

Have feedback about today's release, or the game? Have crazy theories about the story? Want to discuss all things DragonFable?